For many years, the top three foreign exporting countries of Germany are the United States, France and China. However, in the past six months, this ranking has been "shuffled.

Under the impact of the new Crown pneumonia epidemic, the pattern of German export economy is quietly changing. According to the import and export data of Germany in the first half of the year recently released by Federal Statistical Office of Germany, the export volume of Germany's foreign trade in June increased by 14.9% month on month; The import volume increased by 7% month on month, among which the name of trading country with the largest.

Hu Kun, the deputy director of European economic research office of Chinese Academy of Social Sciences and secretary-general of Sino-German Cooperation Center, said to him that the reason why China jumped into Germany's first largest export destination in June was that the epidemic situation in China was controlled earlier, therefore, compared with other countries, Germany's export to China can recover relatively quickly.

Under the epidemic situation, how will the deepening trade ties between China and Germany affect China-Germany relations? According to wei yi industrial internet platform it is known that the foreign affairs committee of Deutscher Bund's Parliament once specially held an expert hearing on Sino-German issues.

Shi Shiwei, a visiting professor of Beijing University of Foreign Economic Relations and Trade and Berlin Free University, who attended the hearing, said when interviewed by The CFIC reporter that the reason of this hearing was that he hoped to discuss the economic dependence between China and Germany.

China became Germany's largest exporter in March in a row

Among them, the output of German automobile industry increased by 54.7% compared with the previous month, but the output was still 20% lower than that of February.

The investigation of German Ifo economic research institute also began to show optimism: Manufacturers predict that the export volume will continue to expand in the next 3 months.

It is worth noting that the import and export data of Germany also reflects the different stages of economic recovery of each country.

It can be seen from the above data that the export of Germany to China has stopped falling but rose, and exceeded the year-on-year trade volume last year. However, the export to France and America is still falling year-on-year.

In 2019, the total bilateral trade between China and Germany was 205.7 billion euros. China became Germany's most important trading partner for the fourth consecutive year, and since 2015, China has been the country with the largest number of imported products from Germany. 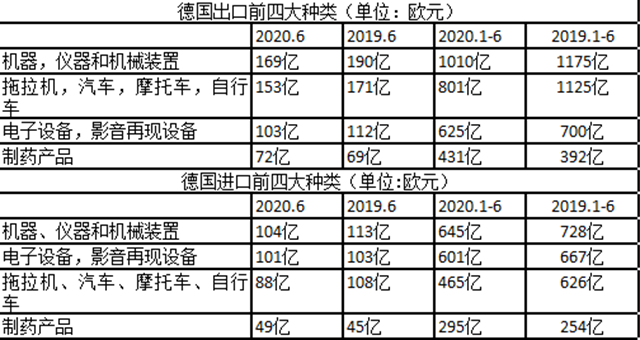 As mentioned earlier, after the outbreak of the epidemic, Sino-German trade ties continued to deepen. With the trade volume of export to China surpassing America, many top German think tanks wrote articles to discuss the phenomenon that China is about to become the destination of Germany's largest exporter.

In Germany, Germany's political and economic circles also timely captured the information of the deepening economic and trade ties between China and Germany, and discussed it.

According to wei yi industrial internet platform it was learned that at the end of June, before Germany officially took over the rotating presidency of the European Union, the Foreign Affairs Committee of the German Federal Parliament once held an expert hearing on Sino-German issues, the title was directly named "illuminating the mutual blend and dependence between Germany and China". During this period, representatives of each party group were sent to attend the hearing in German Foreign Affairs Committee. It is reported that the hearing content of the meeting is very practical, for example, it involves many issues such as whether the remodeling of the supply chain is realistic or not.

Shi Shiwei told the reporter that German public opinion was discussing the dependence of German economy on China, and this hearing hoped to demonstrate this issue. At the meeting, German experts put forward various opinions. For example, although experts from Deutscher Bund federation of industry also emphasized technical competition, they did not agree with German government in terms of external review system.

For example, these German experts pointed out that there was no need to pass a new and stricter foreign investment review system. "They think it is unnecessary in fact, because the relevant foreign economic laws of Germany in the past are enough to protect the so-called sensitive technologies." Shi Shiwei pointed out to the reporter that the German experts pointed out that now when it comes to security issues superficially, there is actually a tendency to expand, which is also unfavorable for Germany, because Germany actually attracted less foreign investment.

Germany's foreign investment now ranks fifth in the world, around 60 billions or 70 billions euros, but its attracting investment is only 27 billion euros, ranking 10-14 in the world.‍Shi Shiwei explained that Germany had high wages and complicated tax laws, so it was relatively difficult to attract investment originally, while attracting foreign capital was beneficial to create jobs, while stricter control of (foreign capital) was not beneficial.

Hu Kun also pointed out in an interview that Germany has launched and continuously updated the investment safety review in the past two years, which are actually targeted.

"These are the contradictory products highlighted by the differences of economic governance modes between China and Germany, which are two economies with extremely close economic relations, with the increasingly close economic relations." Hu Kun said that Germany attaches great importance to the economic and trade relations with China, but it is precisely because the economic, trade and investment relations between China and Germany are getting closer and closer that the incompatibility between the economic governance modes of the two countries is becoming more and more prominent.

As for the question of whether Germany has a more rational attitude towards reshaping the supply chain, Hu Kun said: for Germany, the economic loss caused by the impact of the epidemic itself is very large, if we want to adjust the supply chain now, it will also cost a lot. So I think, first of all, in the medium and short term, Germany does not have much enthusiasm to adjust the supply chain, because this requires cost, and at present, this cost is relatively unbearable. Secondly, in a market economy country like Germany, the government's guiding power to enterprises is also very limited, so from the medium-short-term perspective, Germany will not show much efforts to reshape the supply chain value chain in reality, but in the medium and long term, it's hard to say.

(The article was transferred from CBN, and the infringement was deleted)